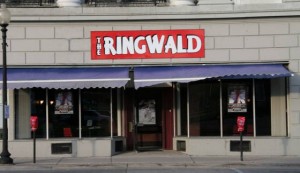 Yelp! Review of the Day

When Hedwig strutted out in her translucent, swishy taffeta skirt and decried the Ringwald as a cheap storefront theatre, we all laughed. But I make a point to never trust the opinion of East German transvestites about theatre venues for good reason. Two words: Soviet architecture.

Chances are you’ve strolled by the Ringwald Theatre on the way to other venues along Woodward Avenue, like the WAB or Como’s. Situated inside the large white Ferndale office building, the front curtained windows allude to a secret world isolated from the fabulous crowds. Coy glimpses might come through the open doors where lines queued for their chance to escape from sultry summer nights or humdrum, day to day routines.

The Ringwald is a venue I’ve meant to visit practically since coming to Ferndale, and the Yelp! Culture Club finally afforded me the opportunity for a premiere debut of “Hedwig and the Angry Inch.” The Ringwald may not be the size of the Detroit Opera House or the Fox. Productions might not have the budget of the Chicago Theatre. A passionate, committed staff and brilliant, sometimes ludicrous performers bring out the joie de vivre of theatre, striking to the soul, pulling you along without sacrificing quality.

Perfectly suited for our lovely, artsy community, the excellent choice of “Hedwig” transformed the interior black box-style theatre into a stage for Hedwig, who in classic Eddie Izzard-esque transvestite style, looked better in a bustier and heeled boots than girls often do. A dedicated set crew flung up lame and sequin-spangled bolts on the walls, and the projected images showed montages of music videos and stills to support the play in one long, glorious act. A few technical difficulties hardly interrupted upon a fascinating show, which featured plenty of audience interaction and laughter. The intimacy of the space works greatly in the Ringwald’s benefit to draw in even reluctant viewers. About my only complaint was a distinct need for earplugs (for sale for $1, if you didn’t bring them), but I was sitting second row, center.

Why do I love Detroit and her suburbs? Reasons like the Ringwald. Intimate places flower with creativity and flourish in the loving embrace of their surrounding community. The Ringwald is for Ferndale, by Ferndale, of Ferndale; so many other sites also benefit from this wholesome symbiosis. My first flirtation satisfied my curiosity and deepened the enchantment out of puppy love into something more matured, like a good wine.

I want my second taste.

Thank you, Ringwald, and thank you, Annette!